Not all my travels are to the far ends of the earth and not all of them are glamorous and exotic. I am a volunteer with the American Red Cross and the past month was quite a deal for me. It was as much of an interesting challenge as some of my travels.

First of all I was deployed up to the /Ft Worth area to help with the preparations for the arrival of Hurricane Gustav and landed up as the job director for the close up of a non event in . I was asked to stay on at the Headquarters because Hurricane Ike was coming and that became a real event.

The Headquarters by-the-way was in an old Sam’s Club building and then we moved into the building that had housed a Wal*Mart next door that was slightly more pleasant. Both buildings had the charm of a warehouses with bulk tables and chairs scattered about and phone and power lines drooping across the ceiling. The picture below shows our little motorhome camped up against the side of the out-or-business Sam's Club with a variety of Emergency Response Vehicles in the foreground. The ERVs are used to deliver food and supplies to neighborhoods. 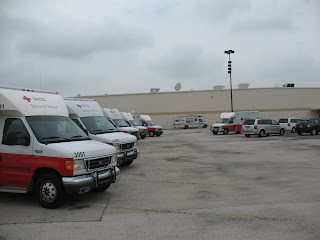 After Hurricane Ike there are small towns on the coast that no longer exits. A million people were out of power. I am not up on the headlines as I didn’t see a newspaper or watch TV for the first week but I do know that there were people inland who did not have a hot meal for a week and perhaps not a meal at all for a while. At the Red Cross we were desperately trying to get our feeding trucks out and about but couldn’t get to every street and had to hand out food at fixed points. If little old Mrs. Smith can’t go the mile to the Point of Distribution she is out of luck for a while. We just hope that neighbors and helping neighbors. Some PODs were 45 minutes from villages but we didn’t have the resources to have additional PODs.

Sheltering has been a scramble too. We had enough space for the evacuation of almost a million people. Fortunately only 10% had no other place to go. They drove and were bussed hundreds of miles away to places like and and flown to the far side of the state. Unfortunately after a couple of weeks the schools out of the hurricane affected area need their space back. The evacuees are being bussed back to and we really don't have anywhere to put them. There was more than buss load of displaced people who were bussed all day back to the city of only to find out that there was no shelter there for them and they had to sit on the bus for hours to return to the same shelter. We are opening old stores and putting thousands of people in them with a cot a couple of blankets and a "comfort kit" which contains a toothbrush soap etc. Some of these good folks have three toothbrushes by now as they have been shuffled about so much.

FEMA has been hopeless and in fact a real blockade to what we are attempting, but that will have to come later.

It is really humbling to know that there are so many people in desperate need and we can't help them fast enough. Still over two weeks after the hurricane there are over a 145,000 people without electricity. We were one of them for eleven days. We had the motorhome rumbling away outside with an extension cord coming into the house. John would wait for me to get off the computer so he could plug in the microwave and heat last night's leftovers. At least we have the motorhome. It is getting hot at night and harder to sleep without air conditioning. Much hotter and we will move back into the motorhome. Like I said we are lucky. Our neighbors to the left were not at home. If they had been they would have been killed by the tree that fell onto their bed. They still have power but the neighbors to the right and across the street had no electricity like us.

Enormous grandfather trees are lying around our neighborhood here in . Some logs as big as 3ft across. I keep thinking all those women in who walk for a day to collect wood. What would they give for all this? As it is the broken trees lie in piles too high to see over but gradually sinking as the live branches wither.

I took the day off today. It is Sunday and I would not have made much headway with the business people I need to contact for sheltering space. I slept in, went for a hair cut, took a nap and went for a walk. After dinner we plan to play scrabble.

John has been so good, getting dinner when I crawl home after twelve hour days and stringing lights all over the place. Great clusters of extension cords to step over. Love him. I can’t grumble about my hours as there are Red Cross nurses who are working long shifts in shelters and then stay on call all night in a shelter. While I was working at the Red Cross HQ in the Sam’s Club in , John was sitting in our motorhome outside doing his work on the computer. At least he had power there and I had the very welcome company at night.

Hard to live without power at home though. I walk into the bedroom and tell myself not to put my hand on the light switch but then reach out to turn the fan on. It has become so automatic.

There are still almost four hundred people missing. They are men women and children. Most did not evacuate when they were told to and now are simply listed as missing. The occasional body is found among the debris but who knows how many people were swept out to sea in the storm.

and the worst hit areas are now coming back to life. Home owners and business people are returning to reestablish themselves. By next year I expect the tourists will be welcomed back to enjoy cotton-candy and sun on the beaches. Perhaps there will be a memorial somewhere that they drive past, like the memorial to those lost in the 1900 storm.