Mahabalipuram
Just try saying Mahabalipuram fast three times. It certainly has a ring to it if you can get your name around it.
It is a magnificent ancient monument that is recognised as a World Heritage Site. I was there last year but I was having such fun with Luda and Joanne that, heck, why not go again. Oh yes, add into the pot that I'm also going again on Friday because that is the only time John can go. I should know it well by then.
First though, Joanne insisted that I tell all about getting money out of the ATM. I needed cash if I was going to hold my head up shopping but I didn't want much as John had arranged to get a supply to last the whole trip. $20 worth of Rupee should be enough or I could but anything grand on my credit card. Our driver kindly found us an ATM. there are 50 rupee to the dollar so if I get out about 200 that will be $40.00. I make my transaction and stuffing my purse with cash, happy that I had remembered my password. Yes, you are way ahead of me. I had just paid $1.00 to get $2.00 out of the machine. It was worth it for the laughs we got all day. Joanne kept making sure that I knew the price of the items that we were negotiating for. I just got a lovely silk scarf that I hope was $2.00 and not $40.00.
Back to Mahabalipuram. I described it in detail in my blog of a year ago so I won't go into history and all that again. It was much quieter this time. Not the cascades of children of colorful families all wanting to be photographed. Instead of hundreds of children sliding down the Krishna's Butterball there were a few goats enjoying the shade. Krishna is one of the Gods and he likes butter but lost his butterball so this must be it. 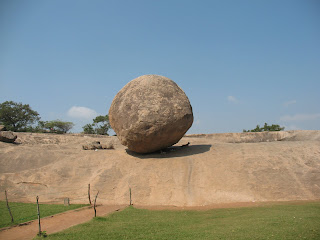 There are five Rathas. These are seventh century temples, each carved from a single bolder. 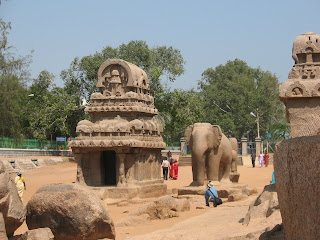 Then there is the life sized elephant also carved from a single granite rock. He is my favorite, standing there so lifelike. Unfortunately much of the work here is unfinished. The craftsmen were interrupted by war. War is such an inconvenience. 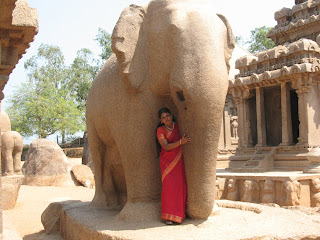 The lady was part of a wedding party, as is shown by her red sari. As is the case with so many of the locals she just loved having her picture taken. 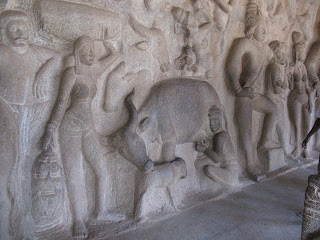 Here is a cow being milked as it licks its calf. It is a beautiful piece of works and so highly esteemed that it is pictured on the currency. Again it is life sized and the whole bas relief in this temple is carved into one rock. Most of the temples were not consecrated which is why we can enter wearing shoes.
The venders were quite persistant. We managed to get a couple items that we wanted and then I noticed a young salesgirl that didn't stand a chance amonge the agressive adults. She stood towards the back with a bunch of beeds and keychains. I made her a balloon hat and she was delighted. Then a woman took it from her and insisted that I picture her. Eventually after a man had comindeered it I was able to return it to the 10 year old. But it was good to see the adults having as much fun as the children. 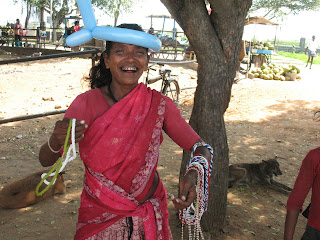 This is the lady who wanted .50 cents for 4 necklaces. No, on second thought I think she wanted $2.00. I'll get it right one of these days.

Posted by Brindle Press at 8:30 PM

Nice reading....I will be visiting Mahabalipuram this month.